The 2022 Confucius Institute Director’s Forum was inaugurated via video link on Sept 14.

The event was hosted by the Chinese International Education Foundation (CIEF) and Beijing Foreign Studies University (BFSU), and organized by the Foreign Language Teaching and Research Press (FLTRP).

The ceremony was presided over by Yu Yunfeng, deputy secretary-general of the CIEF. 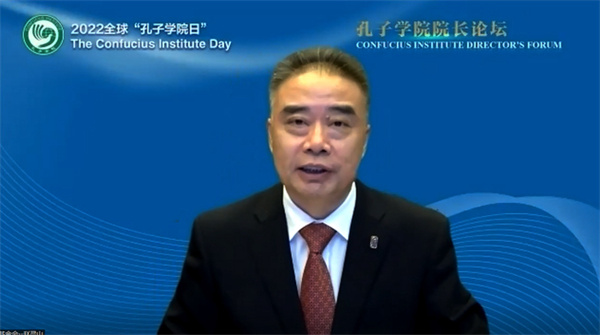 Zhao Lingshan, vice-president and secretary-general of the CIEF, speaks at the 2022 Confucius Institute Director’s Forum on Sept 14. [Photo/bfsu.edu.cn]

Zhao responded to the common concerns of Chinese and foreign directors, and further explained the foundation’s management and service mechanisms for the development of worldwide Confucius Institutes.

Zhao reiterated that Confucius Institutes are Chinese language educational institutions providing extensive consultation, joint contribution and shared benefits for Chinese and foreign friends, and contributing towards cultural exchanges and the mutual learning of civilizations around the world.

Upholding the philosophy “language connects culture and hearts”, Confucius Institutes will attract Chinese learners and people from all over the world and embrace like-minded friends, Zhao said. 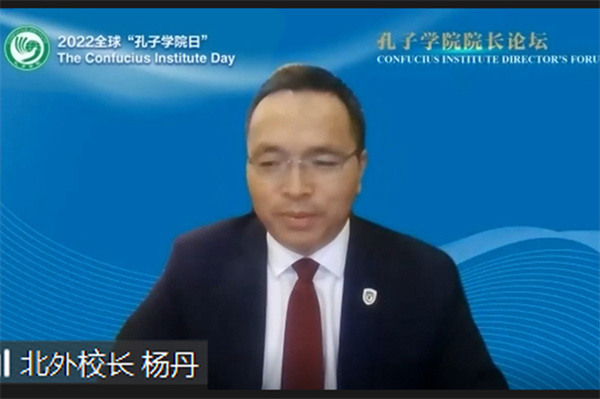 Yang Dan, deputy Party secretary of the CPC BFSU committee and president of the university, gives a keynote speech at the 2022 Confucius Institute Director’s Forum on Sept 14. [Photo/bfsu.edu.cn]

In his keynote speech, Yang explained the role language plays in the development of human civilization and the significance of language cooperation. He further analyzed the current challenges faced by global languages, saying that foreign language education in China and Chinese education abroad are both parts of world language communication and education. He advocated the coexistence, interaction and sustainable development of human languages.

Yang talked about BFSU's exploration of foreign language discipline construction and talent cultivation, as well as its practice in language education, services, research, protection and exchanges.

He invited scholars in relevant disciplines from domestic and overseas universities to gather resources and wisdom in talent cultivation, scientific research and platform building to promote civilization exchanges and mutual learning.

The forum aims to further strengthen cooperation among Confucius Institutes, consolidate the foundation for their connotative development and explore a path of sustainable and high-quality growth.

During the forum, which will last until Sept 24, directors will share experiences on how to improve their teaching staff, better serve local society, create brand images, and develop based on local conditions. The event will also invite professor Roger T. Ames from the University of Hawaii System to talk about his understanding and reflections on Confucianism.

Attendees of the opening ceremony also included Jin Limin, director of the Office of Confucius Institutes at BFSU, and Liu Jie, deputy Party secretary of the CPC FLTRP committee and executive vice-president of the press. 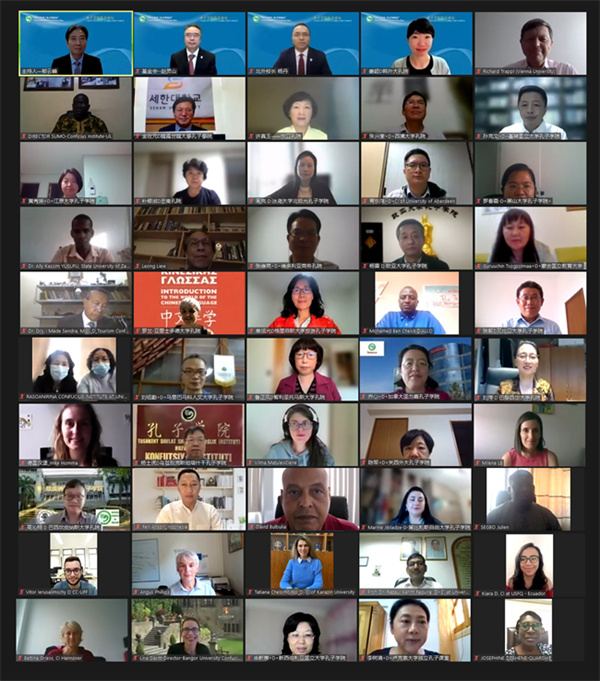