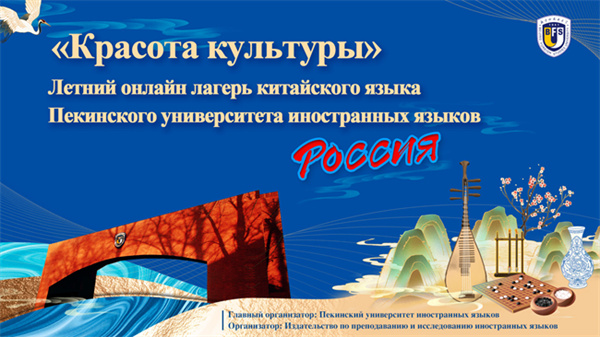 Officials from BFSU and MSLU attend the opening ceremony of the online Chinese summer camp for Russian students on August 1. [Photo/bfsu.edu.cn]

Innara Guseinova, vice-rector of Moscow State Linguistic University (MSLU), Jia Wenjian, deputy secretary of the CPC BFSU committee and vice-president of the university, Li Yingnan, a professor with the School of Russian at BFSU, Jin Limin, head of the BFSU Office of Confucius Institutes, and Mei Chuncai, president of the Confucius Institute at MSLU on the Chinese side, attended the opening ceremony of the online Chinese summer camp.

Huang Mei, secretary of the general Party branch at the School of Russian, presided over the ceremony.

In his speech, Jia briefed trainees on the history and development of BFSU and hailed the progress made by the Confucius Institute at MSLU in teaching Chinese and promoting cultural exchanges between China and Russia.

Jia called on them to fully appreciate Chinese language and culture, strengthen comprehensive understanding of China, link up China-Russia cultural exchanges and make more contributions to the traditional friendship between the two countries via the platforms built by BFSU.

Guseinova expressed thanks to BFSU for holding such a customized summer camp for Russian students to learn Chinese language and culture and experience the development of the country. She said summer and winter camps held by BFSU have received positive response from Russian students, adding that the deepening cooperation between the two universities will definitely foster more talents who master both Chinese and Russian and are capable of promoting mutual learning about the two civilizations.

Li, a representative of teachers for the summer camp, said she was very happy to find so many Russian people with strong enthusiasm to learn Chinese, and to study the country and its culture, and that she hopes that the summer camp will further enhance their passion for Chinese culture.

The eight-day virtual summer camp was financed by the Center for Language Education and Cooperation at the Ministry of Education, hosted by the BFSU Office of Confucius Institutes and undertaken by the Foreign Language Teaching and Research Press.

It drew the attendance of 207 students from over 60 schools in 31 Russian cities. They were provided with live and pre-recorded courses and a series of cultural lectures in accordance with their Chinese proficiency and interests. 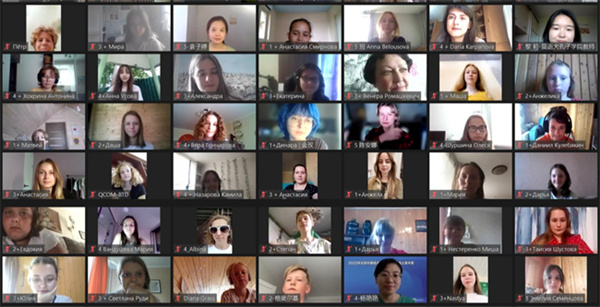 Attendees at the opening ceremony of the online Chinese summer camp for Russian students [Photo/bfsu.edu.cn]

During this summer holiday, the BFSU Office of Confucius Institutes will sponsor 10 sessions of "Chinese Bridge" online cultural exchange programs, six of which are open to people from Russia, Vietnam, Malaysia, French-speaking countries and regions, and the Arabic world, and the rest of which are reserved for worldwide Chinese learners. These activities look to promote the robust growth of overseas Chinese teaching and facilitate exchanges and mutual learning between Chinese and foreign cultures.

The BFSU Office of Confucius Institutes has leveraged its resources and strengths to create diverse platforms for its entrepreneurial teams to talk about traditional Chinese culture and share their experience in entrepreneurial activities with international peers.

Up to now, the number of applicants for the 10 summer camps has exceeded 1,000, and five camps have already opened.