The ceremony was attended by representatives from the academic committee, the Department of Hispanic and Portuguese, the library, and the Hong Kong, Macao, and Taiwan Affairs Office of Beijing Foreign Studies University (BFSU), and over 50 representatives from renowned universities on the Chinese mainland and in the Macao SAR.

The agreement was signed by Wang Shuyuan, executive deputy director of the BFSU library. 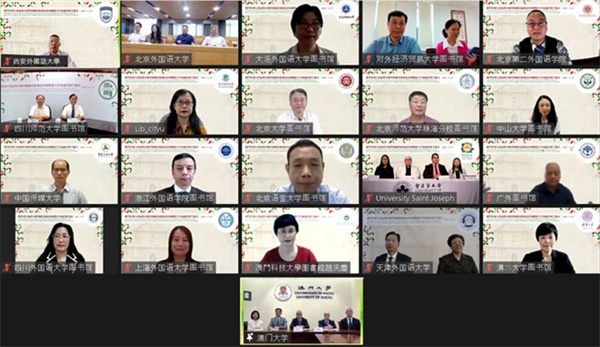 Representatives from renowned universities attend the online signing ceremony of the Academic Library Alliance for Portuguese Language Resources between the Macao Special Administrative Region and the Chinese mainland on Sept 13.

An online opening ceremony for service innovations of member libraries was also held to introduce the union catalogue of Portuguese language resources on the alliance website and in member libraries. Teaching resources were also displayed at the ceremony.

The alliance will hold training programs for enhancing the academic level and service quality of its member libraries, and improving the professional competence of its library staff.

BFSU was among the first universities in China to teach the Portuguese language, with its Portuguese major established in 1960. The major was authorized to offer bachelor’s degrees and master’s degrees, and was shortlisted for the national first-class undergraduate disciplines in 2019.

The library of BFSU has about 3,500 Portuguese books in literature, linguistics and region and country-specific studies. Joining the alliance will provide strong support for BFSU to carry out inter-school cooperation in Portuguese research and promote academic resources sharing.