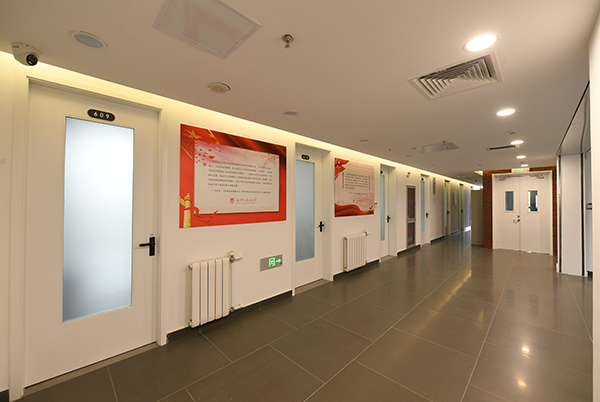 The School of Marxism was established in 2014. It has always adhered to the concept of "Carrying forward revolutionary spirit, cultivating patriotism, broadening vision, and improving comprehensive ability". The school focused on bringing up questions through teaching, composing papers through scientific researches, and displaying achievements in the classroom. Through interaction between teaching and scientific research, the school has significantly improved the teaching quality of ideological and political courses and produced fruitful research results. In the past five years, the teachers of the school have published more than 220 articles and papers in important journals such as "People's Daily", "Guangming Daily", "Social Sciences in China", and "Studies On Marxism", and presided over 23 national, provincial and ministerial projects, laying a solid foundation for building the school into a highland of teaching, research, publicity and talent training in Marxist theory of Beijing.

The school can be traced back to the Russian Language Team in the Third Branch of the Chinese People’s Resistance against Japanese Aggression Military and Political University established in 1941 and the later Yan'an Foreign Language School. Political courses were offered as early as the Yan'an period. In 1951, the school established the Marxist-Leninist teaching and research section. Later the school had been named School of Social Sciences and School of Philosophy and Social Sciences. Then the School of Marxism was established in 2014.

The school currently has teaching and research sections for the basic principles of Marxism, Mao Zedong Thought and the theoretical system of socialism with Chinese characteristics, Xi Jinping Thought on Socialism with Chinese Characteristics for a New Era, the ideological and moral cultivation and legal foundation, the modern history, situation and policy, and the postgraduate education.

As of June 2021, the school had 18 full-time lecturers, 14 of whom have doctoral degrees. The school also employed five part-time professors. The faculty have frequently received awards and honors including “National Excellent Teacher”, “Talent in the Beijing Publicity and Culture System”, “Annual Influential College Teacher in Ideological and Political Theory Education”, “Special-grade Professor and Teacher in Ideological and Political Theory Education in Beijing Colleges and Universities”, “Excellent Teacher Nominee of Beijing", "Beijing Model Worker in Moral Education", "Beijing Teachers' Ethics Pioneer". .

The school will continue to link history and reality, theory and practice and China and the world. It will also keep alive the revolutionary spirit, carry forward studies on Marxist and research of socialism with Chinese characteristics, highlighting comparative study of China and foreign countries and gradually forming its own advantages.
Tel: 01088816864   Email: bwmy@bfsu.edu.cn