School of International Relations and Diplomacy 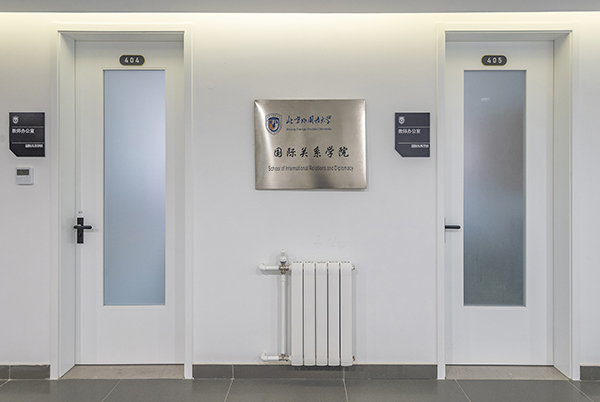 Beijing Foreign Studies University's School of International Relations and Diplomacy was established in 2006 following the merging of the former Department of Diplomacy of the School of English and International Studies and the former Institute of International Studies. Qian Qichen, former member of the Political Bureau of the CPC Central Committee and former vice-premier of the State Council, unveiled the name of the school. Li Zhaoxing, former foreign minister, and Qiu Yuanping, former deputy director of the Office of the Foreign Affairs Leading Group of the CPC Central Committee, successively served as honorary deans of our school. The school consists of the Department of Diplomacy, the Department of International Politics, the Department of Political Science and Administration, the Institute of International Issues, the editorial department of the CSSCI journal "International Forum", and the Research Center for Gender and Global Issues. There are 32 faculty members, including nine professors (researchers) and eight associate professors (associate researchers). Over the past three years, the teachers of the school have published 38 CSSCI journal papers and nine monographs, and presided over eight projects above the provincial and ministerial level. The school now offers a first-level master's program in political science, second-level master's programs in political theory, Chinese and foreign political systems, international relations, international politics, diplomacy, regional science, and public diplomacy, and second-level doctoral programs in international relations and regional studies. There are currently 618 students, including 112 international students. In 2015, the school and the Faculty of French and Francophone Studies jointly recruited undergraduates in diplomacy (French Program). In 2018, Beijing Foreign Studies University and Keele University began to jointly recruit undergraduates in diplomacy. The first-level discipline of political science ranked B in the fourth round of discipline evaluation by the Ministry of Education, and the undergraduate specialties of diplomacy, political science and administration were respectively included in national and provincial first-class undergraduate specialty construction programs. The Chinese language courses, bilingual courses and English courses each account for one third, and students are required to obtain a double degree in English and pass the TEM-8. The school has established cooperation with more than ten universities at home and abroad. Over the past five years, the employment rate of our graduates was above 98%, and more than 50% of undergraduates went to top Chinese and overseas universities for further study.