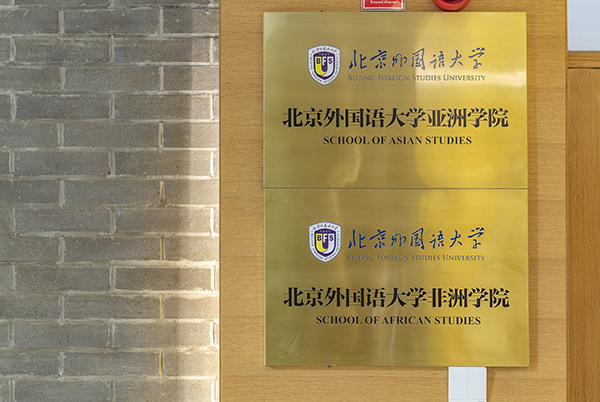 The Asian-African Language Department at BFSU was established in 1961 on the instructions of then Premier Zhou Enlai. In 2001, it was approved by the Ministry of Education as a national minority language training base for undergraduates. In 2007, the Asian-African Language Department was renamed the School of Asian and African Studies. That same year, it was included in the "characteristic specialty construction" program by the Ministry of Education and the Beijing municipal government. In 2019, the School of Asian and African Studies was expanded and the School of Asian Studies was established.

The school now provides 30 language courses, the most among all domestic colleges and universities. In addition, it is constructing nine national first-class undergraduate specialty construction bases and one municipal first-class undergraduate specialty construction base. There are also 12 national and regional research centers and one Sino-Indonesia humanities exchange research center affiliated to the Ministry of Education.

The School of Asian Studies is committed to cultivating complex, international, high-level undergraduates and postgraduates including those in master's and doctoral programs who are proficient in Asian minority languages. It currently has 60 Chinese teachers who specialize in Asian-African languages and literature, political science, philosophy, law, history, art and other disciplines. Of these, 45 percent are professors and associate professors, and 63 percent have doctoral degrees. In addition, there are around 20 long-term international teachers at the school every year. The school has established cooperative relationships with more than 20 well-known universities and academic institutions in Asia, Europe, and the Americas.

Over the past 60 years, the school has trained a large number of minority language talents who have gone on to work in ministries and commissions under the State Council, media organizations, provincial-level foreign affairs offices, colleges and universities, state-owned enterprises, and private enterprises. Of these, more than ten have served as ambassadors, playing an important role in friendly exchanges with Asian countries.
Tel: 010-88816325   Email: bwyzxy@bfsu.edu.cn